info
5.2 features new acoustic experiment. For these recordings on 30 April and 26 November 2000 Lars sampled each key of his piano and built melodies with these notes in his computer. This can be heard in tracks like Helps me Focus and Roseland, August 18. Fabian Baartman joined Psychon Troopers on the November session with his upright bass. Sampled films include Existenz, La Haine and Wilde.

That’s worth spending your money on, you buy 5.2 and get 5.1 in mp3-form for free. That’s two times fifty-six minutes on this disc. Psychon Troopers’ work is best categorized as ambient, but the use of predominantly acoustic instruments makes it yet different. The fourteen songs on 5.2 are justly combined together into one continuous track. The same goes for 5.1, where four pieces are put together. Just sit down and relax and let the music take you on a trip to far horizons and landscapes which you still can come across on Nartional Geographic. Feel the heat tremble, the dew evaporate and the ice-floes slowly melt away. Nice job!

And again a small and intrigueing label pops up in the Netherlands. This time it’s Narrominded from Hoofddorp, which releases music from Psychon Troopers and SGP, but also has Larz in its stable of artists. Psychon Troopers are much more modest than SGP. With minimal means like a piano and some strange electronic equipment they create a very trippy atmosphere. 5.2, their sixth cd already, is a special and nice record.
A negative note: too little information. A positive note: from both bands we will hear more in the future.

The Dutch label Narrominded offers a forum to underground-music, from rock to electronica. Psychon Troopers cling themselves to conjuring ambient-rock that reminds of Pink Floyd and contemporary post-rockbands like Mogwai. 5.2 is quite a trip, to be consumed with spice-cigarettes, washing powder and an overdosis of Tipp-Exx. The honours are yours.

leidsch dagblad
may 1 2001
by lesley grieten 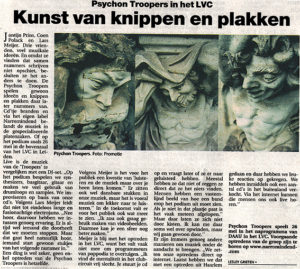